Why is My Motorola Phone So Slow? Speed Up your Phone with these Troubleshoots

The Motorola Phones aren’t as fast as a flagship device, but they should be able to execute your commands without problems and respond smoothly. However, some users of Motorola have complained that their phones are currently running slowly or slowing down in performance.

Performance-related issues are common and in practice, this is normal because we all know that performance degrades with usage, several installed apps, remaining storage space, and time spent without rebooting.

That said, just because your phone is running slow doesn’t necessarily mean there’s a serious problem. There are a few steps you can take to fix this and get your phone running normally and smoothly again.

In this post, we will guide you on how to troubleshoot your Motorola Phone running slowly. We will consider all possibilities and rule them out in turn until we can determine the cause. This is the best way we can solve this problem.

To accurately diagnose and fix this problem, you need to be systematic in troubleshooting. We start to rule out trivial possibilities or procedures that will slightly affect your phone and not delete files and data. With that said, all you need to do is: 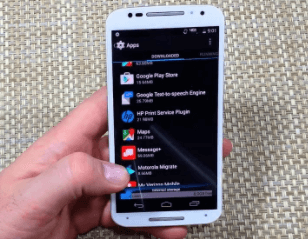 You should do a force restart before anything else, especially if you’re dealing with performance-related issues. This is because in most cases these problems are caused by minor issues with the firmware.

This is an issue that can be resolved by performing a forced reboot, i.e. a simulated battery removal that refreshes the phone’s memory and reloads applications and services.

Related article: How to Fix My Motorola Phone Keeps Restarting Again and Again?

2. Run the phone in safe mode

Running the phone in safe mode allows you to isolate the problem immediately if it is caused by an app. Safe mode temporarily disables all third-party applications. If the phone runs fine in this mode, it means that one or some of the apps you downloaded and installed are causing the problem, which makes troubleshooting much easier. Here’s how to restart your Motorola phone in safe mode:

Take a closer look to see if your phone is still running slowly while in this mode. If the problem is fixed, it means that it was caused by a third-party application. To investigate further, you need to follow these steps:

You may need to uninstall more than one app to fix this issue.

Related Article: How to Turn Off Safe Mode on Motorola G6?

If your Motorola phone is still running slowly after performing the aforementioned procedure, a reset is required. A reset will fix performance-related issues, but you should make a copy of your important files and data as they will be deleted during the process. Also, after backup, remove your Google account to avoid locking your device after reset. When you’re ready, follow these steps to reset your device:

Why is my phone suddenly slow?

If your Motorola phone is running slow, you can quickly fix the problem by clearing excess data stored in your phone cache and deleting unused apps. Slow Motorola phones may require a system update, while older phones may not be able to run the latest software properly.

Are cleaning apps slowing down your phone?

Is it ok to clear cached data?

Yes! These data caches are essentially just junk files and can be safely deleted to free up storage space.

What happens if I clear my Motorola phone’s cache?

The files stored there allow you to access commonly referenced information without the need to constantly re-create the device. When you clear the cache, the system will re-create those files the next time your phone is needed (just like the app cache).

Do Motorola phones slow down over time?

Motorola phones don’t slow down. Bloatware from manufacturers and habits of users slow it down.

What apps are slowing down my phone?

Social networks that are constantly refreshed on your phones, such as Snapchat, Instagram, and Facebook. Instant messaging apps like WhatsApp and Amazon shopping. A file-sharing app such as Google Sheets.

How do I know which apps are slowing down my Motorola?

Now follow Settings–Developer Options–Process Statistics. In this section, you can see the list of apps using the most memory or RAM. That is, you can find the culprit here. This shows which apps are slowing down your Motorola device.

Is Google slowing down my Motorola phone?

The answer is a bit vague, but the consensus doesn’t seem to be the case.